Happy Easter weekend!  Sometimes it is better just to go for it and create a small piece of art especially if you are procrastinating a bit, so here is my funny little egg print.

My walk today was bright and dry and full of birdsong.  The usual suspects showed up  robins, blackbird, blue and coal tits.

Along with crows and wood pigeon, and a crow’s encounter with a low flying buzzard dipping sideways to shake the crow off his tail. Our local canal has a resident heron who is very used to people walking the tow path; he continued his fishing activities unfazed in this morning’s sunshine.

One of my favourite bird calls is that of the Goldcrest.  They are very small, our smallest european bird, and usually situated very high up in conifer trees.  You might see them from below if you are lucky, but then only their olive coloured underside, and unless you learn their call you would not know that they were there at all.   Their call is high pitched, jingling sound,  listen here to find out what it sounds like…..

The goldcrest is a tiny cute little bird that looks slightly glum don’t you think?

These large slate hearts are original paintings for sale at £20 each at the Cotswold Craftmen Gallery, Market Street #Nailsworth GL6 0BX

…..along with wonderful designs by other crafts people in jewellery, glass, pottery, wood, mosaics, sculpture, soaps and more ideas for #christmasgifts.

Pottery at the Cotswold Craftsmen Gallery

Including my large Moongazing Hare LE print in gold edged frame at just £95!

This House Sparrow is having a bit of a crisis.  He has been bringing nesting material to this door for many weeks now even though we have tried blocking his reflection with paper on the outside it has not stopped.  Interestingly the next door neighbours think it is “their” sparrow, as it is trying to get into their house too.

The House Sparrow is an adaptable bird and had been extremely successful in urban settings with flocks of them living side by side with humans up until the 1970’s.  Now House Sparrows may be in real crisis as a successful breeding urban bird that has now all but disappeared from our towns and cities.

It seems though that the actual reason has yet to be discovered.   And this is not just a problem for the House Sparrow in the UK.   For example in India Delhi adopted the House sparrow as its State bird in 2012, this was after they had noticed that the House Sparrow was in severe decline…[there is more interesting reading from The Hindu 2014 here.]

This world wide decline in numbers of House Sparrows started to occur before cell phone radiation was present.  It is suggested that food sources particularly around concentrated human populations have disappeared due to the extensive use use of pesticides and removal of habitat with our concrete architecture.   These birds rely on small insects whilst rearing young and grains and berries the rest of the year.  It has been noted that House Sparrows have moved away from humans, implying that it has to do directly with our activity in these recent decades.

What can you do to help the House Sparrow?  This article gives some tips on how you can assist with the local House Sparrow population right outside your door.

A little bit of editing goes a long way – here’s  my photo of a buttercup from my walk this morning whilst looking for inspiration.

This print was taken recently from my exhibition at The Vault in Nailsworth.  It is rather strange and fortunate that although I had hung the original painting which I am very fond of in the exhibition I then changed my mind and switched it for the print.  There is only one print of this painting.  So if you see this anywhere other than in my possession it is the one that has been stolen.  It is sad isn’t it that this should have happened..?

The new magazine The Contender reports political articles quarterly but also includes a variety of other contributions such as this moving poem below by Imogen Broughton.

The Contender is a political magazine that is not aligned with any particular party and brings politics to you via a variety of informed writers and through different media.  Artwork featured below is by editor Bradley Young

Purchase the 38 page A4 high quality magazine The Contender here

Shame I do not have an SLR camera, but these are not bad for my little Lumix

The Severn Valley Art Trail is on next weekend; look up the venues and view some original art!

I ventured to Nature In Art to see artist in residence Claudia Hahn who is an amazing animal painter.  She uses all sorts of medium alongside gold leaf and bronze pigments and travelled in India on an elephant to capture pictures of tigers for reference.   I can usually resist a purchase but this time I could not walk away without taking home the print below of “Grumpy Old man”.  See this Tiger print below (still in cellophane hence the highlights!). Find out more about Claudia here.

Having mainly  focused on birds this year with my painting I fancied engaging more directly with my subject matter by trying out some bird watching.

Symonds Yat in Gloucestershire is known to have a successful breeding pair of Peregrine falcons.

The first reward for me was not seeing a Peregrine but instead two Nuthatches up close and snapping some half decent photos.

Luckily for me some time later I happened to have in sight the take-off point from which one of the Peregrine Falcons took to the wing and soared out across the Wye Valley below us.  There was a nice atmosphere between the regular birdwatchers who enthusiastically share information.  It was nice to get there early before the throng of tourists and walkers poured in nearer to lunchtime, and needless to say that is when I snuck away.

Peregrine photo below is courtesy of Pixabay images. 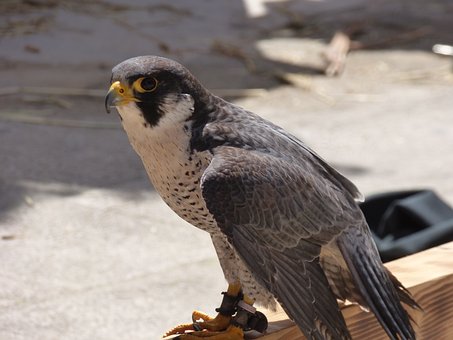 So When is a Painting Actually Finished?

When it has made it to the bin?  Hopefully not.

I have ready many tips on this and this one sums it up in a great way for me.

Artist Bryan Evans states in The Artist that

“…a painting is finished when it’s not as good as it just was, and is unlikely to get any better.”

Easy to say;, but hard to (cockadoodle) do!

Years have passed since I painted a natural landscape and now having watched a demo by watercolour artist John Bailey at my local art club I was inspired to emulate what he had done by using the same sample photo that John used to create his painting but using my usual medium acrylic paints.  It’s a good way to firmly apply the demo to memory!

Highland Cows in the Cotswolds

Having visited Scotland last year I have seen Highland Cattle in fields in their native country,  yet my own photos of Highland Cows are taken very near my home in the Cotswolds where they roam free over hundreds of acres of natural land during the summer months.

Sometimes they just stand on the road and the traffic have to wait for them to move.  I love that these cows are extremely docile and have characterful & steadfast faces.

A helpful way to review tonal variation in a painting is to take a black and white photo.  If you are struggling with a painting and cannot quite figure out h

ow to fix it a quick snapshot can point out problems in this area.  My black and white photo here shows a good range of darks through to white.  There was just a bit of light shadow to add to the face to finish.

Whilst on Dartmoor there were great views all around.  When parked up at various viewpoints other tourists were taking photos of the panorama, whereas I was catching images of rooks who make a curious baby rook noises begging for food at those eating their snacks and chasing one another for the prize.