Bulldog lovers may love their breed but put a bulldog alongside a long eared spaniel or a doe-eyed retriever and the cute looks of the latter two will generally speaking attract more attention than Mr Saggy face. Assuming all things are equal this reaction to looks is just not fair, poor old Mr Bulldog he really is just as nice on the inside, after all beauty (or one’s saggy face) is just skin deep.  But if you like attention cuteness is a useful attribute.

Last night I saw a nature programme about Britain and a topic they covered was about our native Red Squirrel.  The Red Squirrel is under threat as a species since a few Grey Squirrels were imported here in the 19th century from North America and were released by gentry of the time to the wild.  The Grey has now eradicated most of the Red’s population down to small areas of Great Britain mainly because of a disease carried by the Greys that the Red cannot survive. The narrator of this nature program was vehemently against the Greys describing them as many do here as tree rats,  because they are the cause of what could be the total eradication of the Red Squirrel from Great Britain.  The Red Squirrel has all the attributes of cuteness.  His ears are fluffy, his tail is especially bushy, he is very colourful and characterful; straight out of children’s picture books from the 1960’s.  My concern was raised about how we determine the criteria of  favouring one species over another.  Since the Grey would have to be completely eradicated in order for the Red to survive ultimately without human intervention, the only other action that could be taken would be a constant monitoring of areas where there are surviving Reds, culling of Greys as and when necessary. If no action is taken then the Red’s will just disappear from our country altogether. 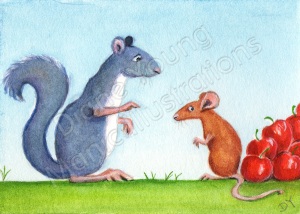 Should the grey be penalised because it is successful at surviving here? Should evolution be allowed to run its own path even though humans have accidentally swayed the natural route of development for a species.  Perhaps we should strive to put things back to how they naturally had been as implied by the programme, on the other hand it is concerning that the criteria by which one species is allowed to survive may actually be subjective with the mention of romantic notions of childhood, the species’ good looks and above all a good dose of cuteness.